I felt miserable after reading your letter. I really apologise that my harsh words caused you personal anguish, and I in no way meant to do that to anyone. I wrote that post on a really angry afternoon and should not have used some of the tough words I used there. I am not a bigot or xenophobe; I apologise, again. It was very uncharacteristic of me and thanks for writing in with such eloquence. I have, you will notice, edited my post to try and make it less offensive.

I do, of course, stand by my views.

Our personal experiences often shape our larger world view. That is perhaps true for both you and me on this issue. You told me of your grandfather; I also know of the pain of a young Kashmiri Pandit woman whose grandfather was brutally killed by people in Kashmir who are now public figures. Then she and her family had to leave their home at a few minutes' notice.

Truth has many faces, and they are often equally true in some measure for all of us. That is how the world works, and that is why people disagree. So even as I completely respect your angst and anguish, I feel the Tibetan community needs to engage and connect more with the people of the country that welcomed it. You say I do not know about the community -- and perhaps you are right -- but could the community have done more at its end to let an Indian citizen understand them better?

I also feel that India needs to get its convoluted policy on Tibet a bit more straightened out, and to look with greater empathy at displaced people within the country who are bearing the brunt of someone else's madnesses.

I was disappointed that you wrote that you are "as much Indian" as I am. You mentioned how you cheer for the cricket team etc. As an Indian citizen, I do not urge your loyalty to India. If you feel Indian, I am honoured that you do. But that is really not my business -- you don't have to prove anything to anybody. Loyalty is not my concern at all -- I am not one of those who will say that a Hindu is very sporting when he cheers for Pakistan but a Muslim is a traitor.

And I hope that the next time the Kashmiri Pandits or Gujarat riot survivors or SEZ victims protest their displacement, the Tibetan Youth Congress and the young generation of Tibetans will lend a chorus of support -- to others who have lost homes and homelands just like they have.
Posted by Writer At Large at 10:22 AM 10 comments:

I got an anguished response last night from a reader to an angry post I had written last month on the Tibetan issue. I would like to reproduce what she wrote:
"Hi,
I am one of what you call "India's most ungrateful and arrogant refugees". Yes I am a Tibetan and I must say I experienced a lot of emotions while reading your blog - emotions ranging from anger to surprise and many in between. India is a free country and we all have freedom to speak our minds, something you and I would'nt have had had we been Chinese citizens. I agree with most of the things you said but I think your knowledge of the Tibetan refugees is very limited.

I can't talk on behalf on all Tibetans but I feel I must say some things. I agree most Tibetans have underpaid Indian help, at some places the shopkeepers would only talk to foreigners and yes, the Indian govt has been helping us since the time of my grandparents. But how many Tibetan places have you visited personally?
I am a Tibetan. I am not a hustler as you mentioned. I pay taxes to the Indian govt and I feel as much Indian as you do. I have raised my voice against the quota system and I cheer equally hard when India wins a cricket match. We Tibetans may not have contributed much to India but I am sure you know the total population of Tibetans in India. 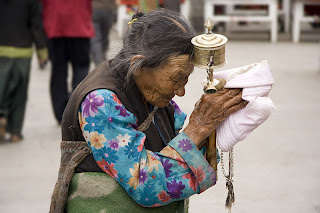 I don't know if you know, but in the Bangladesh war, many Tibetans died fighting for India. Yes hundreds of these very ungrateful Tibetans died. My grandfather, like many, died making roads in India. My ungrateful grandfather! I think maybe one day we should sit and chat, if you have time.
Tenzin
(Images: Courtsey www.tibet.com and www.wikipedia.com)
Posted by Writer At Large at 12:36 AM No comments: