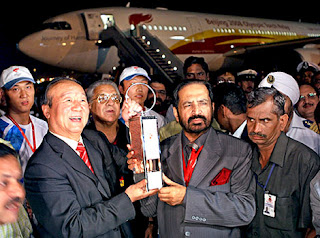 The Olympic shame – oops, flame -- passed through New Delhi today like a pampered head of state, watched by more than 20,000 men-in-arms, forcing thousands of homes and offices to keep their windows closed lest they be harbouring a sharpshooter, shutting down the heart of the city and inconveniencing tens of thousands of people to prevent Tibetan protesters from lunging at the torch headed for Beijing. India had pulled its colonial finery out of the closet.

Bravo. It is a display of slavery that even the Chinese would not have expected.

Clearly, India has lost its sense of proportion. We are a democracy, of course – people can come last.
What happened in New Delhi during the passing of the Olympic torch was yet another piece of the jigsaw of India’s farce over the Tibet issue. Since 1959, India has pampered Tibetan refugees, even as it cruelly ignored its own internal displaced – everyone from Kashmiri Pandits to those displaced by infrastructure projects, and even those seeking a homeland in Kashmir and northeast just like the Tibetans. And then, India kneeled down to Chinese concerns to ensnare New Delhi with security paraphernalia that a U.S. president would be jealous of.
So here is the big picture: India will do nothing to prevent its workers from being put out of jobs by a deluge of cheap and substandard Chinese goods, leaving hundreds of thousands of its citizens – from carpenters to memento artisans to toy makers to electronics goods makers – struggling and out of jobs. India will also do nothing to prevent incursions by the Chinese into what New Delhi claims is its territory. But it will go out of the way to clamp down on its capital city to snuff out fury of the Tibetan refugees against the Chinese government.
This is what that means: due to an internal Chinese issue, Indian people cannot go to work, to job interviews, to hospitals, to pick up people at the railway station.
Ah, that brings me to the refugees. India has spent more than Rs 20 crores in recent times to help Tibetan refugees. That, of course, does not include the costs in diplomacy, or real estate -- go to any hill station in India, and you will find that authorities have provided land in the best of locations for "Tibetan refugee markets". This largesse is at the expense of the local unemployed youth, of course, but then the young jobless in Nainital or Darjeeling or Dadri don’t have a sexy cause to back them, do they? 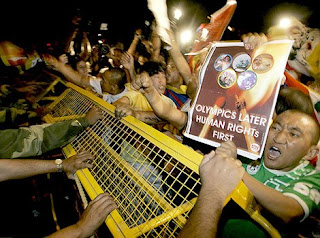 And try finding the refugees at these markets. At most of these shops, you will find, have underpaid Indian servants of the Tibetan refugees. The new generation of the Tibetan in India is not a victim.

The Dalai Lama is a decent man. It is his opponents, the Chinese, and his followers, the Tibetan youth, that I have a problem with. And more than that, I have a problem with how India has dealt with these two protagonists in the Tibet story.
What is the contribution that Tibetan refugees have made to the Indian nation, society and people over the past fifty years? What is their level of involvement and engagement with this country? When Indian refugees or migrants go abroad they make small and big, but always important, contributions to their society. They have a sense of belonging. They drive forward economies.

At a very basic level, the Tibetan story, for me, is about losing one’s home. It is a tragedy I completely empathise with. But it is a tragedy that is resonating far more eloquently in India for Indians – and I am keen to know what India is willing to do for the Kashmiri Pandits who have become a big yawn for the government; for the Kashmiri Muslims and people in many areas in the Northeast who also have an aspiration like the Tibetans for a homeland; and for hundreds of thousands of people displaced by the so-called New India.

India’s warlike exercise to prevent a little flame from being snuffed out has only highlighted the shameful and hypocritical state of denial about the other fires of discontent raging across this nation.