Postcard from a shopping mall

I have a quick question: why can I not ask my wife for an external hard disk as a birthday gift?

(Actually I have three other questions: why do men have to stand embarassed outside women's bathrooms at shopping malls holding the wife's bags as other women pass by, smiling? And why do women's stores, where women love to spend half their lives, not have places for the husbands with swollen feet to sit? And WHY OH WHY can men not swear at bad drivers on the road who zigzag through the roads like impudent rats?)

Anyway, back to the first. I think birthdays are a very over-rated concept, Still, I bear it. So we were at this swank shopping mall in New Delhi today, where my wife Nidhi had hijacked me to buy me a birthday gift.

I am bad at choosing or suggesting gifts for myself, but I said yes, in the spirit of the birthday, and walked down the row of "stores" (seems they get insulted if you call them shops), like a fat model (do not laugh, they will soon be considered icons in anti-skinny France, and hence everywhere else).

Like the multiple choice questions I loved doing in my childhood exams, my wife paraded ideas: a new mobile phone? an Ipod Nano? A watch? 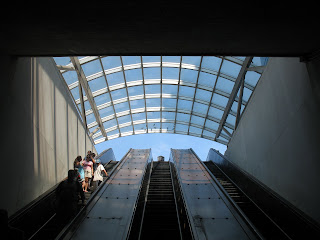 I ducked and swayed, somehow inventing a reason why every single one of those was not what I wanted. "The problem with you, my dear," I told her with some trepidation as we glided into a gizmo shop, "is that while I am trying to faithfully FIGURE OUT what I want, you seem to KNOW what I want."

It was a rhetorical question, of course. Wives made this decision centuries ago that they know what men want. We, of course, had to make and watch a Hollywood movie to try and figure out What Women Want.

Anyway, that is the EXACT moment when the idea hit me. Like Archimedes, I mentally jumped out of the bathtub, mentally shouting "Eureka! Eureka!" and physically rushed towards one counter (without the mental towel). The gift I wanted was right here.

It was a hard disk.

It was 160 GBs of external memory on which I could save the hundreds of pictures I take on trips, my scripts, and the books I download (legally).

"A HARD DISK?" my wife said in a loud, exasperated whisper. "That's what you want for your birthday, a hard disk?" She literally kept her elbow on the counter and held her head in frustration. It was as if I had asked for a broom for my birthday (not that I find that unreasonable in any way, to each his own).

For the next two hours, I pleaded with her as we sauntered around: "Why cann't I buy a hard disk? Isn't the birthday mine? Shouldn't the gift be something I want?"

As I understood it, her main fear was: when her best friends at NDTV would ask her what she bought her husband for his birthday, what would she say? "A HARD DISK!!!!!" What if I asked for a set of Crabtree switches or a cooking gas cylinder next year?

It was indeed a tough dilemma. I dropped her at her parents', and she has just informed me that a brand new mobile phone is on its way as my birthday gift.

I like her gesture. It was very sweet of her. But I intend to keep up the fight for the hard disk.