"Can you help me get a raise? I could not send my daughter to a decent school this year as well. It would have cost Rs. 800," the stocky reporter in Ghatsila town asked my friend, his boss from Jamshedpur.

Covering the Naxal story is not a sexy assignment. It is not lucrative either -- unlike Kashmir, it won't make careers, help people buy big homes, big cars, earn dollars, and American-accented friends. This is the poor man's insurgency. This is a poor reporter's story.

The office was steaming hot, with just one fan whirring, the lights dim, and little to egg them on except their enthusiasm and fly swatters. From this dark hole, the reporters cover the Naxal insugency. They put out news reports when unnamed Naxalites call them and give them reports of ambushes and landmine attacks; or when neatly handwritten Naxal statements come in the post. 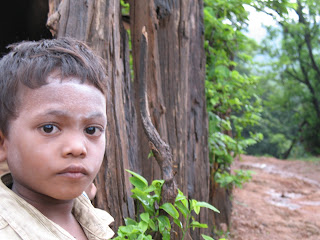 (Pic: A child in a village in the Saranda forest, Jharkhand)

They plod on even when police office accuse them of having links with the rebels or tap their telephones; or, in flamboyant conversations with the rare New Delhi journalist, accuse most local reporters of being "on their payroll".

They plod on not because there is a raise or congratulatory e-mail waiting for them. They do it because they know that somewhere they have become part of the story -- so deeply inter-twined with the lives of the people living in humiliating poverty that they cannot walk away from it.

They are India's true reporters. Even after years of travelling the beaten track, they will still get tears lining their eyes when they hear of the woman who died of third degree burns because she had nothing to cover herself on the winter night and slept too close top the fire.

They will never win any journalism awards or buy new cell phones or get a call and kindwords from the editor-in-chief or sit and give their views in a television channel's studio.
And they will never grudge others who do.