An airport and some mercenaries

I was on another delayed flight today, waiting inside the plane for over an hour and a half. I switched on the tiny TV screen, flipped past the laughter challenge show, past the food show, past the travel show, and was hooked on to an edge-of-the-seat hockey match between India and Pakistan.
An image stayed with me. A man soaked in sweat, in the Indian team’s light blue T-shirt, walked slowly holding his stick after Pakistan beat India 4-3.
But let me take you back an hour and a half.
I was at the departure lounge back at the airport, doing what I always do when waiting in public places: looking at people and trying to guess who they are, what lives they live, and inventing stories about them. Two metres away from me to my left, there was a man completely invisible in the rows of chairs, dressed in a full-sleeved black T-shirt and shorts, listening to songs from his mobile phone and sharing the headphone with his friend on his right.
It was the same man.
It was India’s hockey star, top national team player and former captain Dilip Tirkey. 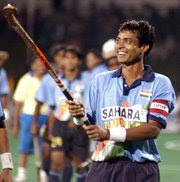 The celebrated defender. The guy who I would watch in amazement on my tiny TV screen at 30,000 feet an hour and a half later, walking back in dejection and complete exhaustion after the defeat to Pakistan.
Dilip sat looking around, barely talking, a face lost among hundreds seated across the huge lounge. He fiddled with his rug sack, the colour of army fatigues. He ran his hand through his short hair. He caught me looking at him. I didn’t say anything.
He then stood up, in the centre of the departure lounge, completely and utterly unnoticed. People walked past him, several people came and sat next to him, picking up newspapers from seats around.
Many of them front-paged pictures of the new mercenaries – players of the IPL cricket league, every man worth some crore of rupees. And there were copies of the entertainment supplement of the Times of India, which had a story about how Kingfisher chief Vijay Mallya had convinced Beyonce Knowles to perform at the inauguration of the IPL, and Shah Rukh Khan had prevailed upon Amitabh Bachchan and his family.
Tirkey went back to his seat – next to the lean man with whom the player had shared the headphone wearing it in an ear each. The other man wore a black cap that said: “Condemned”. I am not sure if it was bitter sarcasm, or a Freudian slip.
I picked up the newspaper with the Beyonce story. It asked readers to turn the page. There, it told them the entire story was for April Fool’s Day.
And I suddenly realised the subject of the joke was sitting next to me, wearing his black T-shirt, a headphone in one ear.
The joke was on him.
The joke was on us, this country that loves to throw money on mercenaries.
(Dilip Tirkey's picture: courtsey The Hindu)
Posted by Writer At Large at 6:33 PM 2 comments: